Wednesday’s remarks are the Hezbollah leader’s strongest criticism yet of Obama since he took office almost a year ago.

Hezbollah and Israel fought a bitter 2006 summer war that killed around 1,200 people in Lebanon and 160 in Israel before it ended with a UN-brokered ceasefire.

Nasrallah said any “illusions” anyone had about the US president being more even-handed in handling the interests of “the Arab nations, Arab and international governments, the Arab Islamic world and in the third world” had collapsed.

He added that “quickly the truth of this delusion was shown and all the analyses and the illusions collapsed”.

“What we see is absolute American commitment to Israeli interests, Israeli conditions, and Israeli security … while disregarding the dignity or feelings of the Arab and Muslims people and their nations and governments.”

Nasrallah, who is influential among supporters of his Shia group in the Arab world, warned Israel against waging another war on Lebanon, repeating his pledge to hit back deep within Israel.

During the speech Nasrallah also lashed out at a major missile defence exercise staged recently by the US and Israeli forces to test technology aimed at protecting Israel from a missile attack.

Nasrallah warned Israel to “send whatever military brigades, five or seven, and if you want send the whole Israeli army … We will destroy and crash it in our hills, valleys and mountains”.

He made no comment on Israel’s seizure of a ship last week carrying weapons it said originated in Iran and were destined for Hezbollah, a claim the group has denied. 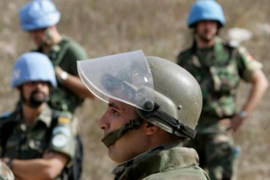 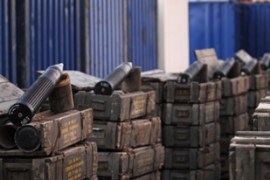 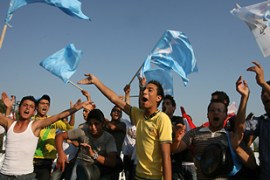 Leader of Lebanese Hezbollah congratulates March 14 bloc after it retained its majority.