Calderon has said that the move was aimed at making the electricity sector more efficient, but union leaders have said that they will continue to resist the closure.

“Due to the appeal we have been given, the decree has to be dismissed. All workers should be allowed to return to work. The union should be able to sit down with the government in order to re-structure and modernise this company, for the good of the power supply, which goes hand in hand with development for all Mexicans.”

Franc Contreras, Al Jazeera’s correspondent in Mexico City, said that Calderon had taken a calculated risk in cutting jobs from the utility company during Mexico’s deepest recession more than 60 years.

“As a presidential candidate, Calderon called himself the ‘president of job creation’. This decision to cut loose 44,000 workers at this point is going to create havoc for many families here,” he said.

“Many people at this march told us the president is after two things here – he wants to squash Mexico’s most independent workers’ union and also take control of resources that the union had under its control.”

As a result of the protests, long queues of traffic built up across the capital, which has a population of more than 20 million.

“They have a right to protest but it’s not fair they affect third parties, such as us,” Oscar Huerta, a Mexico City resident, said.

The union representing 40,000 LFC workers has urged its members to reject redundancy pay offered by the Mexican government.

But so far 23,799 workers – representing 53.4 per cent of the total workforce – have accepted the payments offered, according to Mexico’s finance ministry.

Calderon said that power supplies to the Mexican population have not been broken in spite of what he called sabotage attempts by the workers.

“It’s been a month … In spite of the complexity … I can’t even begin to describe the circumstances, even in their [LFC workers] efforts to try to disrupt the service, the federal electricity commission, has permanently, efficiently and regularly supplied power to the central region of the country,” he said.

The Calderon government’s decision to make redundant thousands of LFC workers is part of its plan to overhaul the public sector, which includes Pemex, the state oil monopoly.

But political analysts say that a total shake-up could inflame sentiment among a host of powerful unions and in turn hurt Calderon’s party in 2012 presidential elections. 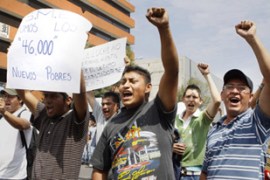