The priest’s release came hours before Hillary Clinton, the US secretary of state, was scheduled to visit the Philippines.

In a phone interview on a morning news programme, Sinnott said he was never harmed by his kidnappers and was given “lectures on their ideology”.

Describing his month-long ordeal at a news conference later on Thursday, he said he had hiked through jungles, survived raging seas and slept in a swamp under a tarpaulin.

“The first 10 days, there was no place for walking around,” he said, describing how he had been fed a monotonous diet of sandwiches and rice.

He said he had been told the reason for the kidnapping was “to get money, to get ransom”.

Philippine officials have said that Sinnott, of the Missionary Society of St Columban, was kidnapped by armed men aligned with a local rebel commander, who had demanded a ransom of $2m.

Officials had feared Sinnott could suffer a fatal heart attack because he was still recovering from heart-bypass surgery. There were also rumours that he had died in captivity.

In a statement thanking the US and European governments, and the International Committee of the Red Cross for their help, Martin said that no ransom was paid for Sinnott’s release.

Paying a ransom, he said, “would only have jeopardised the vital work of aid workers and missionaries around the world” and could place others in danger.

At least two other Irish Catholic priests have been targetted by kidnappers in the southern Philippines.

In 1987 a priest was held for 12 days before being released unharmed, but four years later another priest was shot to death when he resisted his abductors.

In June 2007, kidnappers with links to Moro rebels held an Italian priest for 33 days. 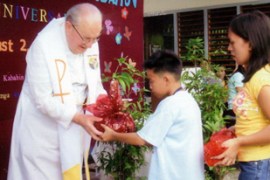