Taylor’s testimony – totalling more than 250 hours on the stand – has chronologically reviewed his life.

He recounted his mixed parentage and boyhood in Liberia, his time at university in the US, his leadership of a Liberian fighter movement, his presidency and, in his words, his final role as a peace-seeking leader.

The final days of his account had little bearing on the 11 charges he faces, and denies, including murder, rape, sexual slavery and recruiting child soldiers in neighbouring Sierra Leone.

Instead, he has given his version of events that led to his resignation as Liberian president in August 2003, subsequent exile in Nigeria and arrest nearly three years later.

Taylor told the panel on Tuesday that the US believed he was a destabilising factor in West Africa, a region Washington saw as a possible future source of oil.

He said the US standpoint was that “we cannot have anyone in Liberia that we don’t think is going to dance to our tune”.

Taylor said Olusegun Obasanjo, Nigeria’s then-president, had assured him the UN Security Council would put the indictment on ice if he left Liberia, but said Obasanjo eventually “cracked” under international pressure to give him up.

Taylor denied reports that he was arrested early in 2006 while trying to flee Nigeria with millions of dollars in cash.

“It is all lies,” he said, telling judges he was only planning a visit to Chad and was carrying around $50,000 to pay hotel and other bills.

As his testimony concluded, Taylor rejected allegations – not part of the indictment against him – that he harboured members of al-Qaeda while he was still in office, calling them yet another US attempt to undermine his administration.

“I am associated with al-Qaeda and providing sanctuary in Liberia and the United States government would just overlook it? Never ever,” Taylor said.

“This shows how desperate they have been to destroy me.”

It was still unclear when the next defence witness will take the stand or who that will be.

Taylor is likely to face weeks of cross-examination as prosecutors attempt to pick holes in his claims that he did not support Sierra Leone fighters whose signature atrocity was to hack off the limbs of villagers.

His is the last trial at the Special Court for Sierra Leone. Eight other fighter leaders have been tried, convicted and sentenced to prison terms ranging from 15 to 52 years.

A ruling is expected in the first half of 2010. 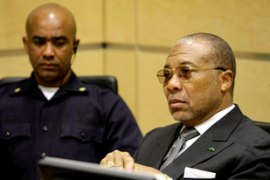 Cross-examining of former Liberian president to begin at war crimes trial in The Hague.