His comments came as the rebels announced they had taken control of more territory on the border with Saudi Arabia, heightening concerns about growing instability in the region.

The fighters released a statement on Tuesday, saying: “Full control was taken last night over Qatabar directorate and control of all supplies and ammunition as well as buildings and other military sites.”

Yemeni officials could not immediately be reached for comment.

The northern province has also been the scene of most of the fighting that has taken place in recent months between Yemeni government forces and the rebels.

Saudi forces have launched a series of military strikes in recent days against the Houthis after the fighters killed a Saudi soldier in a cross-border raid last week.

Riyadh has become increasingly anxious about instability in Yemen, which is facing opposition from the Shia population in the north, separatist sentiment in the south and a growing threat from resurgent al-Qaeda fighters.

The 1,500km border between Yemen and Saudi Arabia is a security worry for the kingdom, which is building a high-tech border fence to prevent infiltration.

Al Jazeera’s Hashem Ahelbarra, reporting from the Yemeni capital, Sana’a, said: “We are amid a campaign and a propaganda war with both sides saying they have made huge advances.

“Saudi Arabia is a key player in Yemen, it has loyalty of tribal leaders, politicians and religious leaders here.

“Saudi Arabia prides itself by saying they are the protectors of Sunni Islam and while 80 per cent of Yemen’s population is Sunni, they say it is their moral obligation to protect Sunnis everywhere in the world.”

Saudi Arabia also has concerns that the Houthis are being used by Iran to fight a proxy war against it.

He also warned Yemen’s neighbours against intervening in the country’s internal affairs.

All those who attempt to escalate strife will not be spared its impact, he said.

Foad Izadi, a professor of political communications at Tehran university, said Iran’s public warning is part of an effort to ensure stability in the region.

“Whenever fighting breaks out in any part of this region it is going to affect every country,” Izadi told Al Jazeera.

“Iran does not want to see a conflict that was internal – inside Yemen – become a regional conflict because that will destabilise the whole region.”

Izadi said the threat of instability was compounded by Saudi Arabia’s military offensive, a move he said was “not advisable”.

“It would have been much better for the Saudi government to mediate between the Yemeni government and the people in the northern part instead of taking sides.

“It’s unfortunate that they decided to do that.”

Houthis first took up arms against the government of Ali Abdullah Saleh, Yemen’s president, in 2004, citing political, economic and religious marginalisation by the Saudi and Western-backed administration.

Aid groups, which have been given limited access to the northern provinces, say at least 150,000 people have fled their homes since 2004. 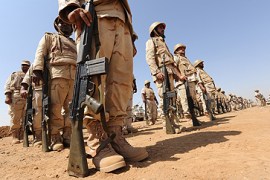 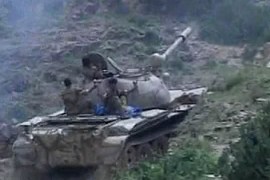