Taylor has vehemently denied supplying arms to Sierra Leone fighters, saying the British and United States governments were involved in the supply of weapons to the region as both countries wanted him ousted from power in Liberia.

He says he was the fall guy in an intelligence plot designed to lead to his destruction.

“My government negotiated the peace in Sierra Leone,” Taylor said under questioning from his defence counsel on Monday.

In 2001, the UN Security Council imposed a new arms embargo on Liberia, first introduced in 1992, after a UN report found that Liberia smuggled arms to Sierra Leone in return for diamonds with Taylor’s “permission and involvement”.

“We will directly challenge Mr Taylor in three ways – on the accuracy, the truthfulness and the completeness of his testimony,” said Joseph Kamara, acting prosecutor.

Prosecutors called 91 witnesses before wrapping up their case in February. In often disturbing detail, witnesses described amputations and murder of children.

Taylor’s trial, being held in The Hague for security reasons, is the last case to appear before the court after an appeals ruling last month confirmed jail terms of up to 52 years for three former fighter commanders.

The former Liberian president has denied claims from a close aide he had a pregnant woman buried alive behind his mansion in Monrovia in a ceremony designed for him to keep power.

He has also dismissed involvement in the cannibalism of a human heart.

“You have a leader eating people, burying pregnant women, and it’s not racist? It is. This is beyond racism,” he said in September.

Jeremy Waiser, a prosecution spokesman, rejected Taylor’s claims of racism or that he had been made a scapegoat.

“If there were a playbook of standard procedures for those accused of the worst atrocities, chapter one would be to distract attention from the charges to claim the trial is some sort of plot from other individuals and nations,” Waiser said.

Once the cross-examination of Taylor is completed, the defence will call other witnesses.

A ruling is expected in the first half of 2010. 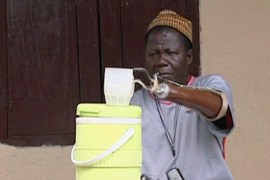