And Ernesto Zelayandia, the deputy interior minister said a river in Verapaz had overflowed its banks and swamped 300 homes.

Heavy rains began falling on El Salvador on Saturday night as the storm moved through the area, causing rivers to burst their banks and mudslides in the hilly interior to bury homes and roads.

Ida strengthened to a category two storm on Sunday as it made its way across the Gulf of Mexico, where it is expected to pick up steam moving over open waters.

Meanwhile, forecasters at the US national hurricane centre in Miami said Ida’s winds were near 100mph and could get stronger overnight.

The Louisiana Offshore Oil Port, the only terminal in the United States capable of handling the largest tankers, said it would stop unloading ships due to stormy seas.

A quarter of US oil and 15 per cent of its natural gas are produced from fields in the Gulf and the coast is home to 40 per cent of the nation’s refining capacity.

The hurricane centre set a hurricane watch – meaning hurricane conditions are expected in the area within 36 hours – from Grand Isle, Louisiana to Mexico Beach in northwestern Florida, but did not include the city of New Orleans.

In the US state of Louisiana, Bobby Jindal, the governor, declared a state of emergency as a precaution, and the US National Guard was put on high alert.

Nearly 1,400 residents in Louisiana are still living in federally issued trailers and mobile homes after hurricanes Katrina and Rita struck in 2005. 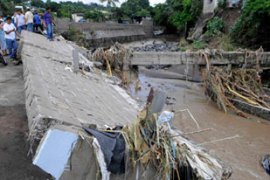 At least 91 killed in El Salvador as storm gathers strength off coast of Mexico. 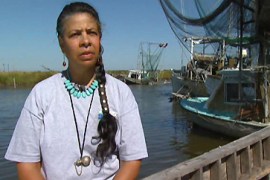