“It was an erroneous air strike which caused casualties to friendly forces,” he said.

The troops had apparently called in air support after they became involved in a battle with Taliban fighters while searching for two missing US paratroopers from the 82nd Airborne Division.

It was not immediately clear how many of the casualties were Afghan and how many from the international forces.

Fate in the balance

Afghan officials earlier said the two missing paratroopers had drowned while trying to recover airdropped food packages from a river.

The Taliban said that international forces had played down the actual toll from the air raid.

“There was … a firefight between Taliban and Afghan and foreign forces in Murghab district of Badghis province. The fighting lasted for hours and was very intense, at a close distance,” Qari Yusuf Ahmadi, a Taliban spokesman, said.

“By the end of the day, foreign forces bombed the area where the clash was going on and due to their own bombing, 32 foreign and 43 Afghan soldiers were killed.”

Badghis is one of several provinces in the previously quiet west and north of Afghanistan, where Taliban activity has increased dramatically in recent months. 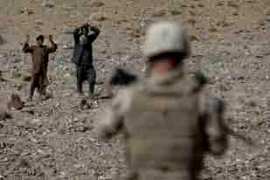