Ethnic clashes broke after the opposition disputed the re-election of Mwai Kibaki, the incumbent president.

Kofi Annan, the former UN secretary-general, who acted as mediator following the crisis, cautioned that there was a serious risk that the violence would be repeated if the people responsible for the killings were not brought to justice.

In July, he gave Ocampo a list of suspects identified in a report by a Kenyan judge. Political sources say it includes cabinet ministers, parliamentarians and businessmen.

“My mandate is to end impunity; to prevent future crimes,” Ocampo said.

Asked whether his investigation would not be a destabilising factor in the run-up to the next election, Ocampo said: “I’m  aware of the need to have a peaceful election in Kenya and so I think that 2010 is the time to identify the evidence, identify suspects, the judges decide on them and [then we’ll] be ready to hold the trail.”

He met Kibaki and Raila Odinga, the Kenyan prime minister, on Thursday and told them he would request the go-ahead for an investigation in December from the ICC’s pre-trial judges.

Ocampo said he had taken the decision to proceed unilaterally because the Kenyan leaders, who now serve in a power-sharing government together, had decided against referring the case to the court in The Hague.

Kibaki and Odinga have reportedly agreed to co-operate with any trials, but reiterated that the government remains committed to “local judicial mechanism”.

Numerous attempts to start a local process have stalled and many Kenyans are sceptical that anyone in a position of power will be arrested and charged. 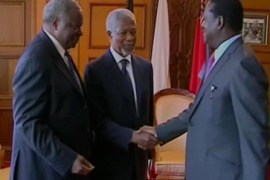 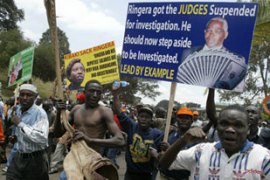 Video: Kenyans in search of justice