Lucia Newman, Al Jazeera’s correspondent in Tegucigalpa, said that “supporters of Zelaya who were celebrating when the accord was signed a week ago are now looking sombre, demoralised and especially very, very angry.

“We understand from the people who negotaited this agreement that it was inherent in that agreement that Micheletti would stand down – but he has not done that. So Zelaya is calling for his supporters to boycott the [general] elections set for November 29.”

Zelaya has long insisted that he be reinstated as president before the general election at the end of the month.

Jorge Reina, a negotiator for Zelaya, said the pact fell apart because congress failed to vote on whether to reinstate Zelaya before the deadline for forming the unity government.

“The de facto regime has failed to live up to the promise that, by this date, the national government would be installed. And by law, it should be presided by the president of Honduras, Manuel Zelaya,” Reina said.

The pact did not require Zelaya’s return to the presidency – it left the decision up to congress. Zelaya interpreted that to mean that congress had to vote on the issue by Thursday.

Supporters of Micheletti, who was named interim president by congress after Zelaya was ousted, disputed that, saying the pact required that members of the unity cabinet be in place by Thursday but that there was no deadline for congress to meet.

Shortly before midnight, Micheletti announced that a unity government had been created even though Zelaya had not submitted his own list of members.

Micheletti said the new government was composed of candidates proposed by political parties and civic groups.

He did not name the new members.

Zelaya, who has been living in the Brazilian embassy in Tegucigalpa since his return in September, decided on Thursday that he would not present any candidates for the unity government, according to Rasel Tome, an adviser.

The same day, Jose Angel Saavedra, the congress president, said the 128-member body would not “avoid the historic responsibility” of deciding on Zelaya’s return to power, but failed to give a date for the vote.

Opponents of Zelaya say that the public vote was intended to measure support for an extension to presidential term limits, in Zelaya’s favour. 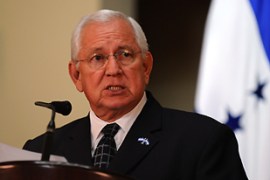