In some areas, water reached the rooftops of buildings, where some residents had sought refuge.

“It is the most devastating flooding in more than 30 years in Phu Yen,” the national disaster committee said in a statement, after part of the province’s system of dykes was overwhelmed.

Local television reported on Wednesday that thousands of people were stranded in pagodas, schools and other public buildings in Phu Yen, unable to reach their homes.

Pascal Bourcher, operations manager for the International Federation of the Red Cross and Red Crescent in Hanoi, told Al Jazeera that more than 260,000 people had been evacuated.

Local authorities in the Phu Yen province have requested emergency food and drinking water from the central government in Hanoi after supplied started to run low.

According to a UN report citing Vietnamese authorities, Mirinae destroyed 900 homes and damaged more than 14,000 others while some 18,000 hectares of rice land was flooded.

Before making landfall in Vietnam on Monday, Mirinae had had previously hit the Philippines as a typhoon, leaving at least 27 people dead.

Over 16,000 people are still living in evacuation centres.

Vietnam and the Philippines are frequently hit by tropical storms and flooding this time of the year and both countries were hit hard by Typhoon Ketsana in September. 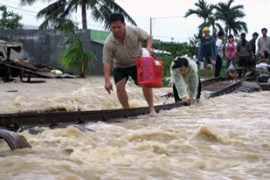 Deaths as storm rages in Vietnam