“This is deeply regrettable and Australia is deeply disappointed at Fiji’s conduct in this matter,” he said on public radio.

Fiji has gone through four coups since 1987, and in April, the president reappointed coup leader Frank Bainimarama as prime minister.

Smith said Australia, along with New Zealand, led calls for a return to democracy in the country.

Despite instability and economic turmoil wrought by the four coups, Fiji is one of the wealthiest and most influential countries in the largely impoverished and aid-dependent South Pacific region.

Rebels who ousted the Solomon Islands government in 2000 cited a coup that year in Fiji as inspiration, prompting Canberra to recast its regional military strategy to deal with what it called an “arc of instability” stretching from East Timor into the South Pacific.

Australia and New Zealand have given travel bans to senior Fiji officials, and pushed successfully for the country’s suspension from key international groups.

The latest spat is over a group of expatriate judges from Sri Lanka that Fiji wants to hire to replace some of those fired by Bainimarama’s administration earlier this year.

This week, Australian and New Zealand officials told the judges that if they take up the posts in Fiji they would also be subject to travel bans the two countries have placed on all senior officials in Bainimarama’s government.

Australia denies it tried to block the Sri Lankans from taking up posts in Fiji but concedes they had been contacted and advised that the Australia and New Zealand travel bans would apply. 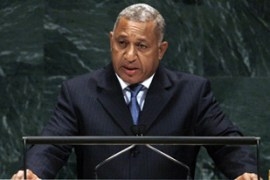 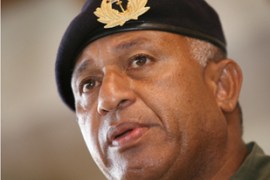 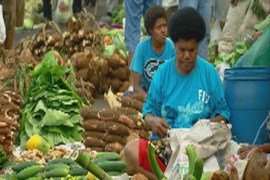 101 East looks at the future of democracy in the struggling Pacific island country.