The bank earned further opprobrium when it set aside a multi-billion dollar compensation pot for its workers.

Republicans have not won statewide in New Jersey in twelve years and a win would send a strong message to Obama, who carried the state in last year’s presidential election.

The Democrats are more likely to be defeated in Virginia, where opinion polls show Creigh Deeds, the Democrat challenger, behind Bob McDonnell, a Republican, by a double-digit margin.

Deeds is running for the Democrats after Tim Kaine, the incumbent Democrat governor in the state, was barred from seeking re-election by a state term-limit law.

“The results of these elections tend to be over-read,” David Plouffe, a former Obama campaign manager, said Tuesday on NBC’s Today programme.

“These are local races. There’s 18,000 lifetimes between now and next November.”

As the governor elections go ahead, a special election is also set to take place in New York state’s twenty-third congressional district, where Republicans who aspire to run in the 2012 presidential election have thrown their support behind Doug Hoffman, a third-party candidate.

Dierdre Scozzafava, the Republican state assembly member, suspended her campaign following the high-profile endorsements for Hoffman, and has now expressed her support for Bill Owens, a Democrat.

Before she dropped out of the race, Scozzafava had been accused by Hoffman as too liberal, with the Conservative party candidate pointing to her support of abortion rights and same-sex marriage.

The results from the contest in Virginia, New Jersey and New York will be closely scrutinised by the country’s politicians as they search for indications about the likelihood of retaining power in the 2010 midterm elections. 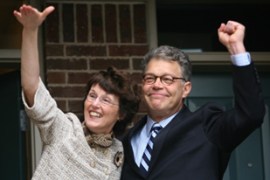 US Democrats get key senate seat

Delayed election result could help Barack Obama push through his agenda in congress.