Willy’s killing was one of a spate of attacks on the country’s estimated 200,000 albinos in the past two years, most of which have been in the remote northwest of the country near Lake Victoria.

The body parts of albinos – who lack pigment in their skin, eyes and hair – are prized in some regions of Tanzania and other African countries, where many witchdoctors say they bring wealth and good luck.

Albino hunters kill their victims and harvest their blood and body parts such as hair, genitals and limbs for potions.

“We are glad that the family and friends of Lyaku can finally have a sense of justice after this horrific loss,” the Reuters news agency quoted Peter Ash, himself an albino and founder of the Canadian non-profit organisation Under The Same Sun, as saying in an email.

“We urge the authorities to swiftly act on the sentence. Justice delayed is justice denied.”

Since 2007, more than 50 albinos, many of them children, have been murdered and their limbs and organs sold to witchdoctors.

Although Tanzania retains the death penalty for murder and treason, it is rarely practiced. Hundreds of death sentences have been commuted in recent years and the last execution dates back to 1995. 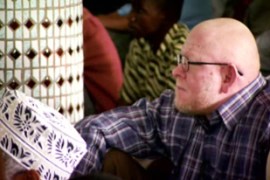 Gang sold body parts from murdered African albinos for use in witchcraft.