His supporters and those of the de facto government have been at odds for four months, but an agreement on Friday raised the possibility that Zelaya could be returned to power ahead of elections in November, as long as congress agrees.

Zelaya told Al Jazeera that he was satisfied with the proposed agreement, which he hopes will see him restored to the presidency before the vote on November 29.

“Roberto Michiletti [the de facto president of Honduras] is the president of congress and he is the one who signed the accord.”

Zelaya’s comments came as Hilda Solis, the US secretary of labour, and Ricardo Lago, a former Chilean president, were named to head a commission which is charged with monitoring the creation of a power-sharing government in Honduras.

Jose Miguel Insulza, the secretary-general of the Organisation of American States, said on Sunday that the representatives will go to Honduras on Tuesday, accompanied by senior OAS officials.

However, there is confusion over when Honduras’ congress will meet to sign off on the deal between Zelaya and the de facto government.

Comments by Arturo Corrales, a negotiator for the interim government, soon after the proposed agreement was struck suggested that congress might not discuss the issue before the elections.

No date has been set for congress to meet on the issue, but the earliest the deal could be debated is Tuesday, legislators said.

Monday is a holiday in Honduras and many legislators are busy campaigning for the upcoming vote that will also elect a successor to Zelaya.

Lucia Newman, Al Jazeera’s Latin America editor, said Zelaya was relying on the political opposition’s increasing popularity in the build up to the elections to push congress into agreeing the deal.

“I’m surprised that he’s that optimistic, but there is a calculation here – he’s depending on the fact his opponents in congress, the opposition party, are leading very substantially in the polls for the up coming election,” she said.

“The calculation is that unless President Zelaya is reinstated, his supporters will boycott those elections. That will take away legitimacy from those elections and it will make it very difficult for the next government to govern without instability.”

Many countries have warned they would not accept the elections if the June coup is not undone – suggesting that if congress approves the pact to reinstate Zelaya, it would win international recognition for the elections.

Zelaya was forced from power on June 28, the same day that he planned to hold a non-binding referendum on the constitution, a move that had been declared illegal by the Honduran congress and supreme court.

Opponents of Zelaya say that the public vote was aimed at winning support for an extension to presidential term limits, claims that he has denied. 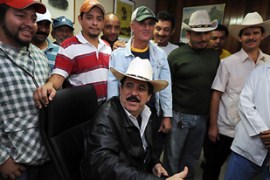 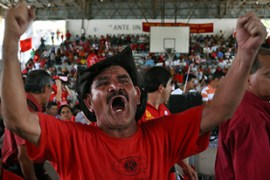