“This decision was not dependent upon when a leader was determined. We’ve never said that,” he said.

Spencer Ackerman, a senior reporter for the Washington Independent, said:

“They really have the worst of both worlds here – there is no way, procedurally, to remove the taint of fraud in the first round of elections, and yet they are stuck with the result.

“The Obama administration [is likely] to focus on governance below the national level, to see if they can get a more legitimate or accepted method of governance out in the provinces beyond Kabul. But there is really no way that they can ignore the Karzai government.”

Afghanistan’s election panel announced the incumbent Karzai’s victory in the presidential election on Monday after a runoff planned for November 7 was cancelled.

Karzai would have been the only candidate after his rival and former foreign minister, Abdullah Abdullah, withdrew a day earlier.

Azizullah Ludin, chairman of the Independent Election Commission (IEC), declared Karzai victor at a news conference in Kabul, despite having stressed earlier that cancelling the runoff would be unconstitutional.

Zekria Barakzai, the IEC’s deputy chief electoral officer, contradicted Ludin’s initial statement telling Al Jazeera later: “Today’s decision by the IEC was according to the provision of the constitution which requires at least two candidates for the second round.”

The discovery of widespread fraud in the first round resulted in Karzai losing his more than 50 per cent advantage forcing him into a second round.

Abdullah cited the government’s refusal to accept his demands for changes in the IEC for his decision to leave Karzai as the sole candidate.

The cancellation of the runoff followed a meeting on Monday between Ban Ki-moon, the UN secretary-general, with Karzai and Abdullah.

Earlier in the day, Karzai had made a plea in an interview with a local radio station calling on Abdullah to reconsider his decision and participate in the runoff, Al Jazeera’s James Bays in Kabul reported.

And in an interview with Al Jazeera, Ludin had stressed that the election would be held despite Abdullah’s withdrawal.

“Under the law, there is no alternative but to have these elections,” Ludin said.

Abdullah had demanded that Karzai sack Ludin and suspend four ministers who campaigned for the president as part of electoral reforms.

He told supporters on Sunday a “transparent election is not possible” and that the Afghan government has been illegitimate since May.

“I’ll not take part in the election,” Abdullah had said, adding that he had “not taken this decision easily”.

US forces invaded Afghanistan in late-2001 to remove the Taliban government, who were viewed to be harbouring al-Qaeda operatives, from power. 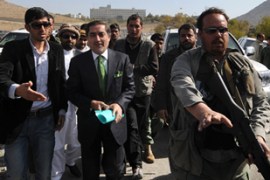 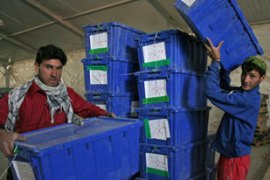 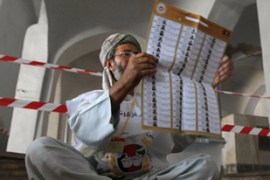 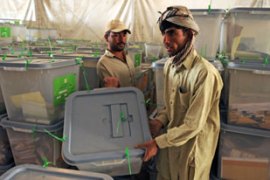