Using their confessions as a bargaining chip, the former participants in the “dirty war” hope to improve their chances of securing benefits from pensions to psychological treatment.

They gathered in the business district of the capital, Santiago, on Sunday for a meeting where Fernando Mellado, the president of the Association of Former Conscripts, informed them that there had not been any progress in talks with the authorities.

Mellado told the Associated Press news agency that all efforts to obtain a pension increase for the years they served in the army or medical assistance – especially psychological care – had failed.

He said the authorities were reluctant to provide them with medical aid because they were considered by many as “torturers and not victims”.

“The first people who were violated during the military government were us, children under 18, we were beaten and tortured inside our military units,” he said.

Other former soldiers at the gathering told similar stories.

“I experienced many terrible things inside, they made me torture people. Yes, I was a torturer,” Jorge Acevedo said.

He confessed that people died in his hands after he gave them electric shocks.

“They threatened me, if I did not torture them I’d get killed,” Acevedo said.

Of the 8,000 people drafted as teenagers from Santiago alone in the year when Pinochet overthrew Allende’s government and cemented his hold on power, Mellado believes “between 20 and 30 per cent are willing to talk”.

Chilean security forces killed 3,186 people during Pinochet’s rule, including 1,197 who were made to disappear, according to an official count.

In nearly two decades of democracy since then, less than eight per cent of the disappeared have been found, an official of the Assembly of Family Members of the Disappeared Detainees said.

Hundreds of recovered remains, some just bone fragments, have yet to be identified. 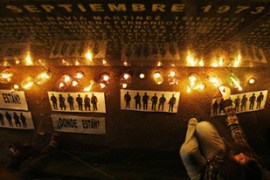