Berlusconi told reporters outside his Rome residence that he felt “invigorated” after the ruling.

He said “we go ahead” and described any trial against him as a “farce”.

The court said in a statement that after two days of deliberations, it had found that the law violated the principle that all are equal before the law.

It rejected it on formal grounds because it had not been passed with the lengthy procedure that must be used for any law concerning the constitution.

The law is an amended version of earlier legislation that was rejected by the court in 2004.

Speaking to Al Jazeera from the Italian capital, Eric Terzuolo, a professor of geopolitics at the University of Rome, said: “In the immediate term it’s going to make Berlusconi’s life much more difficult.

“It unfreezes a couple of very important prosecutions against Berlusconi and pretty much on a daily basis now he is going to be under pressure.

“He’s going to have to respond to the official acts of the magistrates, but also press leaks, comments etc. It’s going to keep him very tied up.

Berlusconi has had a history of legal troubles stemming from his private interests, but his supporters say the law was necessary to spare Italy’s senior office-holders from politically motivated persecution.

Critics said the law had been tailor-made to help Berlusconi.

Paolo Bonaiuti, Berlusconi’s spokesman, said in a statement on Wednesday that the ruling had been “politically motivated”.

“This is a politically-motivated sentence but Prime Minister Silvio Berlusconi, the government and the majority will continue to govern, as they have done since April 2008, in the way that Italians requested with their votes,” he said.

The prime minsiter’s allies had said they would stand behind him regardless of the court’s decision. 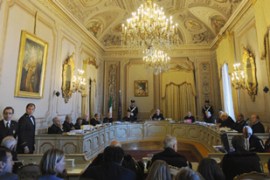