Cowen said the Irish had better understood the second time around what benefits the treaty would bring.

The Irish government was pressed to call the second referendum by EU leaders as the treaty cannot take effect unless all the member states ratify it.

Voter turnout was reported at 58 per cent.

The result is also a relief for Cowen, who would have been likely to lose his job had it gone the other way.

His centre-left coalition has lost its technical majority in parliament and is suffering in opinion polls.

In a hard-fought campaign, the government, business leaders and even celebrities had said a second rejection risked isolating Ireland while it relied on the goodwill of the European Central Bank and foreign investors to pull out of one of the worst recessions in Europe.

Jonah Hull, Al Jazeera’s correspondent in Dublin, said: “The last time the Irish voted last year the economy was good and they feared a threat to their national sovereignty from a European super-state, well this time the country is in deep economic crisis and it appears to have changed its mind.”

Ahead of the vote, Dublin received assurances from EU partners that its sovereignty on issues like taxation, military neutrality and abortion would not be affected by adopting the Treaty of Lisbon.

Ireland was the only EU country constitutionally obliged to put the treaty to a referendum.

The Irish approval turns the spotlight on Poland and the Czech Republic, the only two countries still to ratify the treaty.

Donald Tusk, the Polish prime minister, said on Saturday he hoped for his country to ratify the EU treaty “very quickly.”

But Vaclav Klaus, the Czech president, said Prague’s ratification was “not on the cards” anytime soon, noting that the Czech constitutional court has asked him not to take any action until it has ruled on the matter.

Deaglan de Bredun, a political correspondent with the Irish Times, told Al Jazeera there was still a slim chance the Lisbon treaty could run into problems.

“The ‘no’ campaigners hope that the Czech president will delay long enough for David Cameron [Britain’s opposition leader who is opposed to the treaty] to get in [as prime minister] as expected, that he will have a referendum and they will defeat the Lisbon treaty. But that is a bit of a long shot,” he said.

“If the treaty is not in force when the election is held, and if we are elected, then we will hold a referendum on it,” said Cameron, who is widely tipped to win a parliamentary election scheduled for next June.

The Lisbon treaty paves the way for more qualified majority voting in the council of ministers, increased involvement of the European parliament in the legislative process and the creation of a president of the European Council with a term of two and half years.

It would also create the role of “high representative for foreign affairs” to present a united position on EU policies. 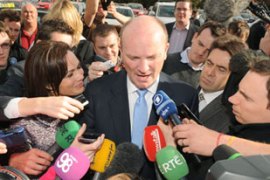