The underground nuclear fuel facility near the city of Qom had been kept secret until Iran disclosed its existence last month, setting off an international furore.

Iran is locked in a dispute with the West which accuses it of trying to manufacture nuclear weapons.

Iran rejects those charges, saying its nuclear programme if for civilian purposes.

ElBaradei said the IAEA and Iran disagreed over the timing of the disclosure of the pilot enrichment plant.

“Iran should have informed the IAEA the day they had decided to construct the facility,” he said, referring to an IAEA transparency statute that was tightened in 1992 to require immediate notification of planned
nuclear sites.

Previously a state had to alert the IAEA of a new site just six months before introducing nuclear materials into it.

Salehi rejected this, saying: “Ever since the unfair entry of the UN Security Council into Iran’s nuclear dossier, we reverted to the old arrangement in protest at UN sanctions.”

Baqer Moin, an Iranian political analyst, cautioned that when it came to progress over negotiations concerning Iran’s nuclear programme, “the glass is neither half full nor half empty”.

“At the moment both sides seem to be happy that progress has been made. Promises have been made now we have to wait to see how it is going to be implemented and what devils they can find in the details,” he told Al Jazeera.

“I think the Iranians are happy – they have established their own enrichment [facility] inside the country, which has been presented to the Iranian people as a success.

“I think the Americans are happy that the Iranians are going to give permission for the IAEA to visit the new facilities in Qom … So both sides have something to be happy with.”

The announcement of the inspection date came a day after a US newspaper quoted a confidential analysis by IAEA staff suggesting that Iran had acquired “sufficient information to be able to design and produce” an atomic bomb.

The New York Times on Saturday said the analysts’ report put Iran at a further stage in the development of nuclear weapons than thought by many governments, including the US who said in 2007 that Tehran had stopped its efforts to construct such a weapon in 2003.

But Jim Jones, the top security adviser to the US president, dismissed the report and said Iranian co-operation in the last few weeks was good for nuclear non-proliferation.

“Whether they know how to do it or not is a matter of some conjecture, but what we are watching is what is their intent and we have been worried about that intent,” Jones said on CBS’s “Face the Nation” programme.

“We now have an Iran that is willing to come to the table.”

Asked on CNN, another American news network, whether Iran was closer to having a bomb, Jones said: “No, we stand by the reports that we have put out.” 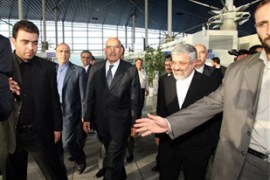 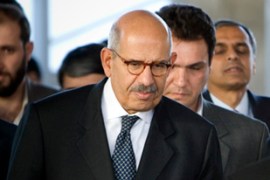