“Considering our land is already saturated with water, it may cause flooding in some areas. It is hard to tell if there will be floods but we are preparing for the worst,” Ernesto Torres, a civil defence spokesman, said.

Torres added that residents in the typhoon’s path have been told to stock emergency provisions to last 72 hours.

Valerie Lewin, from Oxfam in the Philippines, told Al Jazeera that at least 155,000 people have been affected by the typhoon.

“The government has been quite well prepared [having learned from previous typhoons],” she said, “There has been a lot of preemptive evacuation.

“[However] a lot of people went back to the evacuation centre, and we are concerned about the hygiene of the centre at the moment.

“We are faced with some relocation sites that are definitely not appropriate for us to provide basic services.”

The coastguard grounded 45 ferries in key ports on Luzon, stranding thousands of people returning to provinces for All Saints’ Day, when many in the largely Roman Catholic country mark the deaths of relatives.

“We cannot move, this is no joke … The water is high. We need help,” he said in a public address via Radio DZBB.

Rescue teams were dispatched to the flooded communities but were having difficulty moving in light trucks, said regional disaster officer Fred Bragas.

“As of now, our efforts are concentrated on rescue and evacuation,” he said.

The storm was projected to veer away from the Philippines in the direction of
Vietnam by late Saturday.

Two typhoons in the last two months have killed more than 900 people in the Philippines. 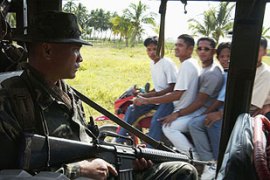 Government and Muslim separatists sign agreement not to target civilians. 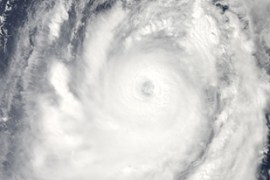 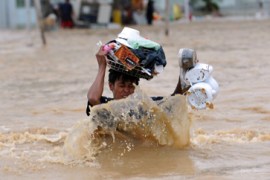 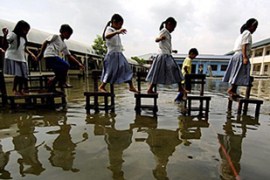