The man was shot and died after being rushed to the hospital, but interior ministry officials did not specify whether he had turned the gun on himself or been shot by police.

The announcement came shortly after the United Nations confirmed a special envoy would be visiting Baghdad on the following day to make preliminary findings on security after last weekend’s bombings and a similar attack against government offices in August.

The interior ministry said it had recognised that “negligence led to this incident” and announced that it would name a judge to lead an independent inquiry.

Sunday’s twin suicide bombings against government buildings in central Baghdad killed at least 150 people and wounded more than 500, the deadliest attacks in Iraq in more than two years.

They followed similar attacks on government ministries in the capital in August, which killed around 100 people.

Baghdad has accused neighbouring Syria of harbouring the masterminds behind those attacks. 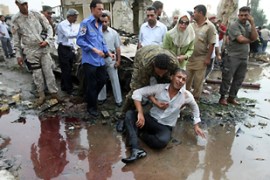 More than 60 police and soldiers detained over Sunday’s bombings in the Iraqi capital.