“We Germans don’t have very much in our history to be proud of,” said Kohl, 79. “But we’ve got every reason to be proud about German reunification.”

“Mikhail Gorbachev and George Bush were Germany’s most important partners,” he said.

Bush, the US president from 1989-93, hailed the thousands of East Germans who risked persecution by attending mass protests to demand reform in the months leading up to the Wall’s collapse.

“The point needs to be made that the historic events we are gathered to celebrate were set in motion not in Bonn, or Moscow or Washington but rather in the hearts and minds of the people who had too long been deprived of their God-given rights.

“The Wall could never erase your dream, our dream of one Germany, a free Germany, a proud Germany,” said Bush, 85, during the ceremony in a theatre just east of where the Wall stood from 1961.

The Berlin Wall, a symbol of the Cold War, was brought down in 1989 and the two Germanys reunited 11 months later. Researchers said at least 136 people were killed trying to cross to the West.

Gorbachev said the opening of the Wall and the end of the Cold War was the culmination of a long process of post-World War Two rapprochement.

“The people were the heroes,” said Gorbachev, 78. “The three of us don’t want to take credit for the accomplishments of the previous generations.”

At midnight on November 9, 1989, East Germany’s Communist rulers gave permission for gates along the 45-kilometre barrier to be opened after hundreds of people gathered at crossing points.

On October 3, 1990, the two Germanys merged to form a new united country. 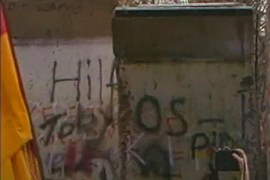