The statement came after 16 days of talks, which have failed to reach a settlement once before.

Zelaya was ousted from power in a coup – the first in a decade in Central America – on June 28.

He returned from exile in Nicaragua almost three months later to the Brazilian embassy in Tegucigalpa, the Honduran capital, which he is using as a base.

Majia said that Zelaya would now discuss with his team in the Brazilian embassy how to work out their next move.

Oscar Arias, the Costa Rican president, supported by the Organisation of American States, negotiated the initial talks, which ended in stalemate.

Arias had proposed the San Jose Accord, whereby Zelaya would have been allowed to return to the presidency until the end of his term in January.

This was rejected by Micheletti’s side.

Zelaya’s negotiators have accused their rivals of delaying tactics in holding up the talks in order to keep Micheletti in power until previously scheduled elections on November 29.

However, Vilma Morales, a Micheletti negotiator, dismissed the accusations.

“This committee, having categorically rejected the 12 midnight ultimatum … states that our answer or counteroffer will be presented tomorrow at 10am [1600 GMT] Friday,” Morales said.

Regional governments, including the US, have said that they will not recognise the November poll unless Zelaya is returned to power.

The putsch against Zelaya came as he pushed forward plans to hold a public-consultation on whether to change the constitution.

The Honduran congress, courts and military had opposed Zelaya’s attempt to hold the public vote, accusing him of trying to win support for an extension to presidential term limits.

Zelaya has defended his effort to hold the referendum, saying that it was aimed at improving the lives of the poor in Honduras.

The protracted political impasse has taken a grim economic toll on the country’s 7.6 million-strong population. 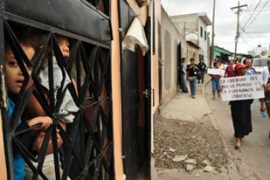 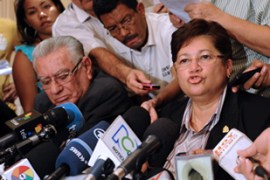