The head of an outlawed sect accused of beheadings, extortion and racketeering in Kenya has told Al Jazeera that he is stepping down as the group’s leader.

Maina Njenga was freed from prison last week, after Kenyan authorities dropped multiple murder charges against him, citing a lack of evidence.

Returning to his home after more than five years in jail, Njenga renounced violence and called on his followers to give up crime.

But his departure from the Mungiki sect raises questions about the future of the group and the effect it could have on Kenya’s political landscape. 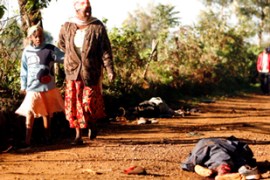