Finishing third was Pedro Bordaberry, 49, of the Colorado party and son of the president who ushered in Uruguay’s 12-year dictatorship in 1973.

The presidential race will be decided in a one-on-one runoff vote on November 29.

Lacalle, the conservative former leader from the National party, has ideological differences with Mujica, who hopes to create enduring socialism in Uruguay.

Lacalle believes in a free market and wants to cut government taxes and distance Uruguay from Latin American leftists. He pushed hard to privatise government as president in 1990-95.

He now wants to remove the income tax imposed by Tabare Vazquez, the outgoing president, and downsize the government.

Vazquez is ending his five-year term on a wave of popularity but is constitutionally barred from re-election.

Mujica’s Tupamaru guerrillas were inspired by the Cuban revolution to organise kidnappings, bombings, robberies and other attacks on the conservative but democratically-elected governments of the 1960s.

He was convicted of killing a policeman in 1971, and endured torture and solitary confinement during nearly 15 years in prison.

In the quarter-century since he was freed, Mujica helped transform the guerrillas into a legitimate political movement and the driving force within the Broad Front coalition.

He eventually became the top vote-getter in congress and served as Vazquez’s agriculture minister, developing a reputation for populist policies and impolitic commentary.

But critics of Mujica say he does not have the qualities needed to be a good  president.

“He’s a man who simply can’t be president of Uruguay… he lacks presence. He can’t speak,” Walter Perez, a Colorado party worker, said.

“If he travels abroad and talks like he does, they’re going to throw him out.”

Analysts say that if Mujica wins the runoff he is likely to continue the policies of Vazquez, including plans to cut unemployment, strengthen minority rights and introduce laws allowing homosexuals to form civil unions and adopt children. 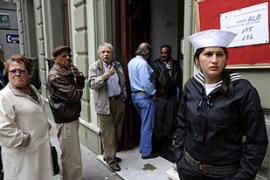