Amongst a certain generation in Sarajevo, especially in the more intellectual circles, it’s easy to find people who remember Radovan Karadzic.

The Bosnian capital was Karadzic’s home, on and off, for thirty years. He knew the city well and had many friends here.

Now, amongst a lengthy list of charges, he is accused in court of waging a campaign of terror against Sarajevo, “in violation of the laws and customs of war”.

The prosecution says that during the siege of the city, from April 1992 to November 1995, Serb forces – under Karadzic’s ultimate control – were involved in the indiscriminate shelling and sniping of the city, and that, as a result, thousands of civilians were terrorised, wounded or killed.

So what made Karadzic turn against Sarajevo with such apparent fury? I’ve spent the past few days in the Bosnian capital, tracking down some of Karadzic’s old friends and acquaintances.

Professor Marko Vesovic is a well known poet, writer and commentator in Sarajevo. He first met Radovan Karadzic in the mid-1960’s.

They had things in common – they were both young students, recently arrived from Montenegro, trying to make their way in the big city.

It’s often said that Karadzic was never accepted by Sarajevo’s elite; that he was mocked for his country ways and generally considered unaccomplished.

Professor Vesovic concurs, to some extent.

He says Karadzic was “an average poet”, without great talent, and lazy. But he was not, according to Vesovic, an outcast.

The professor remembers how Karadzic “would hold dinners, and invite people of different nationalities and religions”.

“People would eat and drink, talk literature and politics. Karadzic was accepted here, he got everything from Sarajevo.”

But later, during the war, says Vesovic, people would approach him in the street, and ask him how Karadzic, who had once been so kind and polite, could be doing these things.

Now, of course, Vesovic has not seen Karadzic for many years.

“He is no longer important to me, now that I know he will die in prison,” he says.

Doctor Ljubovic Senadin is another old acquaintance of Karadzic. They worked together in a psychiatric clinic in the late 1970’s.

He remembers how Karadzic was “always hanging around without being invited – he wasn’t very competent, or taken seriously – but he was determined to make friends with poets and writers; he would flatter them”.

Perhaps the most interesting thing about Karadzic, according to Senadin, is his ability to re-invent himself.

“There have been five or six different Radovan Karadzics; the student activist of ’68, the writer, the failed sports psychologist, the businessman, the ultra-nationalist leader, and finally, the spiritual guru,” he says.

In theory, according to Senadin, Karadzic’s trial should help the healing process in Sarajevo, and enable people to move on.

In practice, that may be too much to hope for. The scars run too deep, and the old, multicultural Sarajevo has gone.

It was shattered brutally, in the war that Karadzic waged against the city that had once been his home. 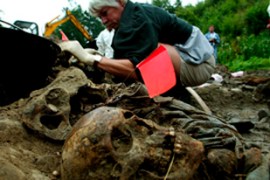 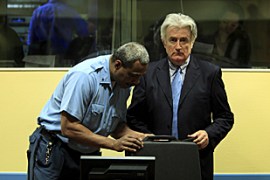