A number of issues will be discussed, including US drone strikes inside Pakistani territory, and an aid package that would give the country $1.5bn of US aid each year over the next five years.

Clinton’s trip comes as the Pakistani military presses ahead with a major offensive against members of Tehreek-e-Taliban Pakistan (TTP) in the semi-autonomous tribal region of South Waziristan.

“Pakistan is in the midst of an ongoing struggle against tenacious and brutal extremist groups who kill innocent people and terrorise communities,” Clinton told a news conference on Wednesday.

“This is our struggle as well and we commend the Pakistan military for their courageous fight and… [we] stand should to shoulder with the Pakistan people in our fight for peace and security.”

Since the assault began, the military claims to have killed at least 231 fighters, and lost 29 soldiers.

Independent verification is all but impossible because the military has blocked access for journalists and humanitarian workers.

More than 125,000 people have been registered as displaced by the Pakistan military’s offensive in South Waziristan since October 13, UN officials have said.

According to diplomatic sources, Clinton’s trip to Pakistan, billed by the administration of Barack Obama, the US president, as one of her most important trips after assuming office, will concentrate on determining the causes of growing anti-Americanism in the country.

“Maybe some in your country will say, No, I really didn’t have a good opinion [of the US] before; I thought it was all about, ‘Are you going to be with us or against us on the war on terrorism.’ But this is a new day,” Clinton told Pakistan’s Dawn news in an interview later on Wednesday.

The Pakistani government’s approval ratings are low, and analysts believe this is attributed to its relationship with the US.

Omar Waraich, a journalist for the UK-based independent newspaper, told Al Jazeera: “What Hillary Clinton is trying to do is overcome the trust deficit between the two countries and win over the Pakistani military and people who have been increasingly sceptical over the last two months over Washington’s presence in the region.”

However, there is also anger in Pakistan at conditions attached to the aid package.

Last week, John Kerry, a US Democratic senator, held talks in Islamabad in an attempt to counter protests over the aid package some officials said would “violate the country’s sovereignty”.

Although the government defended the package, the military establishment expressed concerns about conditions that hinge some aid on efforts to battle suspected Taliban fighters.

The bill prevents the funding from being used for nuclear proliferation, to support fighters or to attack neighbouring countries, and calls for a cancellation of aid if efforts to crack down on pro-Taliban groups fail.

US military handling of the conflict in the region has also come under scrutiny, prompting the United Nations to call on it to demonstrate it is not randomly killing people during its pilotless drone attacks inside Pakistan.

The US does not officially confirm or deny the drones attacks.

Philip Alston, the UN special rapporteur on extrajudicial executions, told a news conference in New York on Tuesday that drone strikes against suspected fighters in Afghanistan and Pakistan could be breaking international laws against summary executions.

“The problem with the United States is that it is making an increased use of drones/predators [which are] particularly prominently used now in relation to Pakistan and Afghanistan,” Alston said.

US strikes with remote-controlled aircraft against suspected al-Qaeda and Taliban targets in Afghanistan and northwestern Pakistan have often resulted in civilian deaths and drawn criticism from local populations.

“The onus is really on the United States government to reveal more about the ways in which it makes sure that arbitrary extrajudicial executions aren’t in fact being carried out through the use of these weapons,” Alston added.

He also urged the US to be more transparent about how and when it uses drone aircraft.

“We need the United States to be more up front and say, ‘OK, we’re willing to discuss some aspects of this programme,’ otherwise you have the really problematic bottom line that the CIA is running a programme that is killing significant numbers of people and there is absolutely no accountability in terms of the relevant international laws,” Alston said.

Since August 2008, around 70 strikes by unmanned aircraft have killed at least 600 people in northwestern Pakistan. 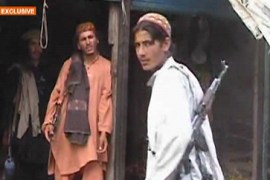 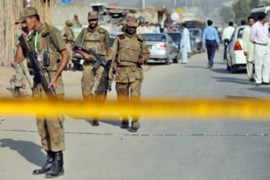 Officer and his mother are unharmed after their vehicle come under fire in Islamabad.