Soldiers in Myanmar are forcing Rohingya refugees to build a barbed wire fence on the Bangladesh border.

The fence they are building is designed to stop their own people from moving across the border.

Inside Bangladesh, Rohingyas are being persecuted and kept in miserable holding facilities. They cannot go home, they are not officially recognised as asylum seekers and they have nowhere to go.

Myanmar’s security forces are overseeing construction of the barrier.

The Rohingya are a Muslim ethnic group from the northern Rakhine state of western Myanmar, formerly known as Arakan state.

Their history dates to the early 7th century, when Arab Muslim traders settled in the area.

They are physically, linguistically and culturally similar to South Asians, especially Bengalis.

According to Amnesty International, they suffer from human rights violations under the Myanmar military government, and many have fled to neighbouring Bangladesh as a result.

The vast majority of them have effectively been denied Myanmar citizenship.

Approximately 20,000 Rohingya are living in UN refugee camps in Bangladesh.

Nicolas Haque reports from Teknaf, on the Bangladeshi border with Myanmar. 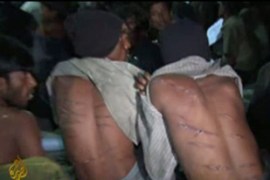 Ethnic Muslim migrants say they were beaten on their way to Thailand in boats. 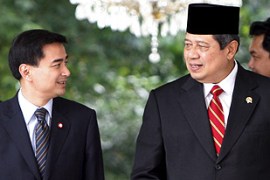 Abhisit says he will discuss the Muslim boat people with Indonesia’s president. 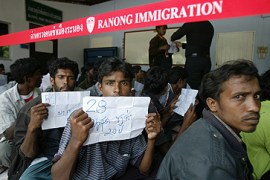 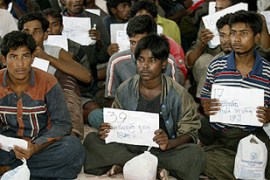 Thailand: No asylum for Rohingya

The government says migrant boat people will be deported to Myanmar.