Nuri al-Maliki, the Iraqi prime minister, visited the site of the attack on the provincial government office, where he spoke to officials and security officers.

“These cowardly terrorist attacks must not affect the determination of the Iraqi people to continue their struggle against the remnants of the dismantled regime and al-Qaeda terrorists,” he said in a statement.

Al-Maliki said the attacks would not affect the political process or parliamentary elections due in January, and promised to punish those behind the bombing.

For his part, Jalal Talabani, the Iraqi president, said: “The perpetrators of these treacherous and despicable acts are no longer hiding their objective but to the contrary, they publicly declare that they are targeting the state … and aiming at blocking the political process, halting it and destroying what we have achieved in the last six years.”

Barack Obama, the US president, said the bombs showed the attackers’ “hateful and destructive” agenda.

“I strongly condemn these outrageous attacks on the Iraqi people, and send my deepest condolences to those who have lost loved ones,” he in a statement released by the White House.

“These bombings serve no purpose other than the murder of innocent men, women and children, and they only reveal the hateful and destructive agenda of those who would deny the Iraqi people the future that they deserve.”

He telephoned both al-Maliki and Talabani to offer his condolences.

Hillary Clinton, the US secretary of state, said: “These despicable terrorist attacks seek to undermine the impressive progress that Iraq has made towards stability and self-reliance.”

She said Washington “will continue to support the people and government of Iraq in fighting terrorism”.

Anders Fogh Rasmussen, Nato’s secretary-general, condemned as “reprehensible” the attacks, saying in a statement: “On behalf of Nato, I strongly condemn the bombing that occurred … in Baghdad, which caused huge loss of innocent life”.

The European Union’s Swedish presidency expressed its disgust, while France offered its “full solidarity” and Britain said the attacks had “no justification”.

An Iranian foreign ministry official said: “These terrorist actions aim to wreck stability and the process of reinforcing democratic  structures.”

The Cairo-based Arab League said it “vehemently condemns the blasts” and that it supports and “Iraqi government plans to impose law and security and to fight violence and terrorism”.

Ali al-Dabbagh, the Iraqi government spokesman, and Major-General Qassim Atta, spokesman for the Iraqi army’s Baghdad operations, both said 99 people had been killed in the attacks.

A senior official in the health ministry, which bases its toll on combined figures from hospitals, confirmed the number of dead and added that more than 700 people were wounded.

Atta said the lorry was carrying one tonne of explosives while the car was packed with 700kg.

Jihad al-Bolani, Iraqi interior minister, said: “The preliminary report presented to me states that today’s bombings are connected with the August blasts.”

Al-Boulani said that security forces are now trying to hunt down fugitives who were convicted in absentia in the August terror attacks.

They are believed to have a role in Sunday’s blasts.

The blasts targeted the finance and foreign ministries, the sites of which were not far from Sunday’s blasts.

Othman said: “They are trying to solve the problems concerning the elections law. I hope this will urge them to work more than before to solve this problem.”

But Ahmed Rushdi, an Iraqi analyst, said that pointing to al-Qaeda in Iraqi and elements from the Baath party, the party of Saddam Hussein, the Iraqi leader overthrown in the 2003 US invasion, was an electoral strategy. 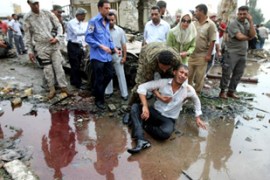 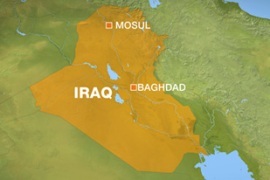