Al-Yami told the Reuters news agency: “The king has vindicated me. I am satisfied with the king’s order and I accept the decisions of the sovereign.”

Al-Yami worked as a co-ordinator for the popular show “Ahmar Bilkhat al-Areed”, or Bold Red Lines, but has denied involvement in the particular episode in July that prompted the charges.

In that episode of the show, aired by the mainly Saudi-owned Lebanese Broadcasting Corporation (LBC), Mazen Abdul-Jawad, a Saudi man, spoke openly of his sexual experiences including giving tips on how couples can spice up their sex lives.

On camera from his bedroom, he spoke about how he picked up girls in the city of Jeddah and had sex with them.

Earlier this month, Abdul-Jawad was sentenced to five years in jail and 1,000 lashes.

Sulaiman al-Jumeii, his lawyer, maintains that Abdul-Jawad was duped by LBC and was unaware in many instances that he was being recorded.

On Monday, al-Jumeii urged the information minister to intercede with the king to include all those involved in the case under the same ministry committee.

“They are being tried by a court that is not specialised in this issue and has not even summoned LBC or watched the raw film,” al-Jumeii said in a statement.

“Justice should not be divided as long as it is one case.”

Three other men who appeared on the show were also convicted of discussing sex publicly and sentenced to two years imprisonment and 300 lashes each.

The LBC’s two offices in the kingdom have been shut down.

Saudi Arabia prohibits sexual content on television and in newspapers, magazines and books. 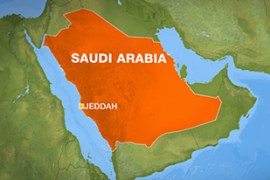