Mend said it had formed a team – which included Wole Soyinka, the Nigerian Nobel literature laureate – to discuss its demands with the government.

The government welcomed the development but said it would not be engaging the Mend-appointed team.

“The people selected are not militants. We are talking with the militants who are directly involved in the issue,” Godwin Abbe, Nigeria’s defence minister, said.

State oil companies reacted positively to news of the ceasefire.

“That’s good news. This is what we want to hear and what we are looking for,” Levi Ajunuma, a spokesman for state oil company Nigeria National Petroleum Corporation, was quoted by The Associated Press as saying.

One of Mend’s key demands is that local communities benefit more from Nigeria’s oil wealth.

The ceasefire follows a meeting last week between Umaru Yar’Adua, the Nigerian president, and Henry Okah, the longtime Mend leader.

Jomo Gbomo, a Mend spokesman, said that after the meeting, Okah had “indicated the willingness of the government to negotiate” with Mend.

The president’s office described last Monday’s talks as “fruitful”, and it was also reported on that day of the meeting that the government plans to plough an extra 10 per cent of the money it makes from Niger Delta oil back into the region.

Many fighters in the Niger Delta have put down their weapons under a government amnesty programme that began in August and ended earlier this month.

Okah has urged remaining fighters who have shunned the government amnesty to give dialogue a chance.

Government officials say that more than 8,000 fighters disarmed under the deal, which grants the fighters an unconditional pardon in return for peace.

Fighters in the Delta region have attacked and kidnapped hundreds of oil workers, including dozens of foreigners. They have attacked pipelines and offshore facilities and even Lagos harbour.

Although there is no precise death toll, several hundred fighters and civilians have been killed in the region since 2006. 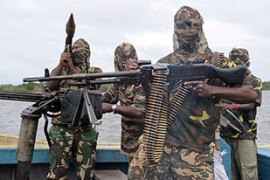 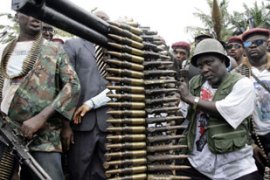