Dozens of ambulances rushed to the scene, with rescue workers trying to use a crane to lift one wagon from on top of the other to extract more people from the trains.

“The trains were travelling on the same track. One ran into the other as they headed towards Upper Egypt,” a security official told the AFP news agency.

“I was sat near the road at around six o’clock [16:00 GMT] when I heard a deafening screeching, then shouts and I saw passengers jumping from the train,” he said.

Al Jazeera’s Amr El-Kahky, reporting from the scene, said rescue teams were lifting the train wagons off the rail track.

“It looks like the rescue operation itself has been suspended after rescuers have decided that probably no more people alive are inside these wagons.”

In February 2002, Al-Ayyat was the location of Egypt’s worst rail disaster. A passenger using a stove set a train alight as it was heading to the south of the country, killing at least 361 people.

Other fatal incidents have occurred when trains have crashed into each other.

“Sometimes there have been court rulings on some of the rail workers on charges of negligence, and the Egyptian government has started a modernisation plan.

“But there seems to be reoccurring issues which must be addressed for these crashes to stop, namely the railway crossings”, El-Kahky said.

In July 2008, at least 20 people died in a collision between a train and a bus near the Mediterranean city of Marsa Matruh in northwest Egypt.

At least 58 people were killed and 144 injured in August 2006 when a passenger train slammed into the back of another on the same track, derailing carriages and setting one train ablaze. 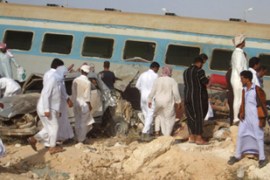 At least 40 die as truck ploughs bus and cars into path of speeding train.