Horst Seehofer, the head of the the CDU’s Bavarian sister party, the Christian Social Union, said the government would cut income taxes by $36bn (24 billion euros) in 2011-2013 to spur growth.

The deal was a compromise from the higher figure sought by the FDP.

“The financial issues at the end are always the most difficult and most exciting and you have to do that great care,” Seehofer said, explaining why the talks stretched until the middle of the night.

As the cabinet posts were divided between the parties, Wolfgang Schaeuble, a CDU member and currently interior minister, was given the post of finance minister.

Before the election, he indirectly criticised Merkel’s pledged tax cuts, saying there was
little room for them given Germany’s strained finances.

Germany’s economy, Europe’s largest, has been hit harder than most by the global slowdown, triggering its worst recession since the foundation of the Federal Republic in 1949.

Guido Westerwelle, the FDP leader, has been appointed as foreign minister.

In foreign policy, the parties agreed to press the Afghan government to take on more responsibilities so that Germany’s 4,200 troops, who are part of the Nato-led mission, can go home.

The Afghanistan issue will also be part of the portfolio for Karl-Theodor zu Guttenberg, currently economy minister, who will get the job as defence minister.

According to leaked details, the coalition agreement also included plans to scrap the 2000 decision to abandon nuclear power by around 2020 by extending the life of some reactors. 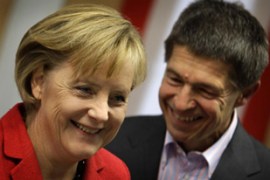