Following Tehran’s announcement, ElBaradei said he hoped Iran’s response would be positive as it was important for a new “era of co-operation”.

The deal on Iran’s LEU was brokered by the IAEA at a meeting involving all four countries in Vienna, Austria, at a meeting on Wednesday.

Earlier on Friday, Bernard Kouchner, the French foreign minister, had said indications that Iran would sign up to the deal were “not positive”.

“I do not know what the results in Vienna today are, but the signs we received [from Iran] this morning are not positive. It is a pity,” he said.

ElBaradei set Friday as the deadline for the four powers to sign the arrangement after their meeting on Wednesday.

The US will wait a few days for Iran’s response to the offer, President Barack Obama’s administration said on Friday.

“I think we can stretch things a few days,” Ian Kelly, the US state department spokesman, said. “But we’re not going to wait forever.”

“This is a real opportunity for Iran to help address some of the real concerns of the international community about its nuclear program and at the same time still provide for the humanitarian needs of the Iranian people.”

Martin Navias, a defence analyst from London’s Kings College, told Al Jazeera that nuclear powers such as France would be able to provide Iran with fuels for its research reactor.

“The problem is that Iran seems to be offering this in exchange for the present deal.

“What seems to be happening in Tehran is that the authorities are fearful that once that material is out of the country, it may not come back, or it may be held back in order to Iran. So they’re getting cold feet about it.”

The unnamed source says Iran will say how much they will export and that it is not up to other nations to tell them what to do, our correspondent reported. 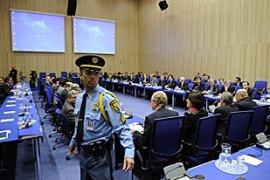