He went on to become the final president of Uruguay’s civilian-military dictatorship. Hundreds of political opponents disappeared during Alvarez’s rule.

Alvarez’s sentencing came a year after Juan Maria Bordaberry, the first dictator of the post-coup period, was detained on charges of crimes against humanity.

Alvarez has been held since December 2007, after being found guilty of kidnapping exiled activists living in Argentina who were sent to Uruguay and executed in 1978.

The murder charges came after an appeal court ruled that charges of disappearances should be converted to homicide – in turn, bringing the possibility of a heavier sentence being imposed.

Uruguayans are set to vote on Sunday in a referendum on whether a law that obliges judges to consult with the government before bringing soldiers and police to court on rights charges should be dropped.

The public vote will run in parallel with presidential elections scheduled for the same day, in which Jose Mujica, a former guerrilla who spent several years of the dictatorship in prison, is the favourite.

According to a survey published in the daily Ultimas Noticias on Monday, 47 per cent of the public are in favour of the law being scrapped.

Forty per cent are against and 13 percent have no opinion or are undecided, the newspaper reported.

The families of 231 people recorded as missing by a special commission lodged a lawsuit after Uruguay returned to a democratic system in 1985, but the soldiers alleged to have a role did not answer judges’ summonses.

A law requiring consultation with the government on rights cases was adopted by parliament in 1986 and ratified by referendum in 1989, but for many years the law was considered by successive conservative governments as a de facto amnesty. 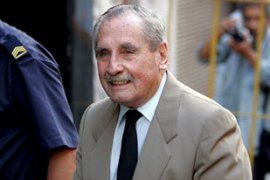 Gregorio Alvarez charged over disappearance of political dissidents in 1970s.