Iranian mourners have filled the streets of the capital, Tehran, to mark the deaths of their loved ones in Sunday’s suicide attack in southeastern Sistan-Baluchistan.

Iranian authorities have arrested three people in connection with the attacks, in which 24 people were killed, including 15 members of the country’s elite Revolutionary Guards.

A Sunni rebel group has claimed responsibility for the attack, but Iranian officials say the group has links to Pakistan. 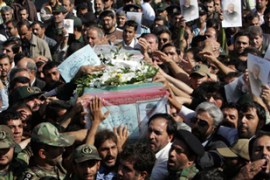 Authorities detain Iranians in connection to Sunday’s attack as funerals are held.