However, a judge also released them pending trial, while four children who came with the group were not questioned.

“Welcome peace ambassadors! Kurdistan is proud of you!” chanted thousands of Kurdish demonstrators waiting outside the border area as the group, some dressed in combat fatigues, climbed aboard a bus to travel to Diyarbakir, the largest city in Turkey’s mainly Kurdish southeast.

The group had been arrested on Monday after they walked through the Habur gate on the border between Turkey and Iraq.

Erdogan described their return as a “very positive and pleasing development” and called on all PKK fighters to return to Turkey from Iraq and Europe.

“I renew my call to all those in the mountains, those in the Makhmour [refugee] camp and those in Europe: I recommend to them that they return to their country without losing time,” he said in a speech to his party members in parliament on Tuesday.

Erdogan’s initiative is expected to give greater freedoms to the 12 million-strong Kurdish minority and includes provision for PKK fighters who surrender, and are not found to be involved in attacks, to be treated with leniency.

The PKK had announced fighters would return to Turkey on the wishes of Abdullah Ocalan, the jailed PKK leader, to promote peace.

The organsation’s activity has dwindled sharply in the past couple of years after an increase in Turkish cross-border operations against them in northern Iraq and enhanced co-operation between Ankara, Iraq and the United States.

However, prospects of the process leading to PKK disarmament are unclear, with Ankara resisting Kurdish political calls for an amnesty.

Besir Atalay, Turkey’ interior minister, said the return of the group was part of the wider reform plan and said more would follow.

“We expect the initial group which is coming to reach 100-150 people. We are advancing towards a solution with a good plan,” he said.

About 3,000 people spent the night in tents near the Iraqi border to show support for the group.

Ahmet Turk, chairman of the pro-Kurdish Democratic Society Party (DTP), said the move “shows that the PKK is insisting on peace not war”.

The DTP, Turkey’s only Kurdish party in parliament, has long been suspected of links to the PKK, branded a terrorist organisation by Turkey, the United States and the EU.

The DTP denies this, but risks a legal ban in a case before the country’s constitutional court.

The PKK took up arms in 1984 to carve out an ethnic homeland in the predominantly Kurdish southeast.

The conflict has severely hampered economic development in the impoverished southeast, which lags far behind relatively prosperous western Turkey. 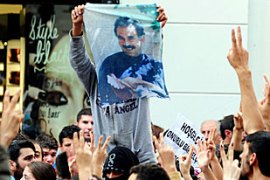