For more than two hours the balloon was tracked across Colorado, with US news networks giving the chase blanket coverage.

As the pursuit intensified, Denver airport was temporarily closed and the National Guard scrambled two helicopters in a massive search and rescue effort.

Eventually the balloon deflated and came down in a field some 80km from the Heene family home, but Falcon was nowhere to be found.

The saga appeared to have a happy ending when, after a five hour search, he emerged from hiding in the family’s upstairs attic.

But the story took a further unexpected twist later that day when Falcon apparently blew the whistle on his parents live on TV.

“You guys (his parents) said that, um, we did this for the show,” he said, after a CNN interviewer asked Richard Heene to ask his son why he had not responded when his parents called out his name.

The family then gave several more interviews on US morning shows on Friday, a day after incident, emphatically denying that the incident had been staged.

But during those appearances Falcon was seen to vomit several times live on camera, adding to suspicions that the family’s story may not have been entirely credible.

It later emerged that Richard Heene and his Japanese-born wife, Mayumi, had met at acting school in Hollywood and had previously appeared in the TV reality show “Wife Swap”, in which families swap mothers to deal with family issues.

He had also pitched several other ideas for reality shows to US networks.

Speaking to reporters on Sunday, County Sheriff Jim Alderden said police had interviewed all five members of the Heene family – including their three sons – and all appeared to have been in on the scam.

He said Richard Keene and his wife would likely face felony charges including contributing to the delinquency of a minor, attempting to influence a public servant, and filing a false report.

“This has been a planned event for some two weeks,” Alderden said. “Needless to say they put on a very good show for us and we bought it.”

Alderden said police could also seek monetary compensation for the cost of the rescue operation.

During their TV appearances, Richard Heene had sought to portray himself and his family as keen storm-chasing amateur scientists who conduct wacky experiments from launching rockets to searching for extra-terrestrials.

But Alderden ridiculed that image, saying: “His education level is only high school.”

“He may be nutty, but he’s not a professor.” 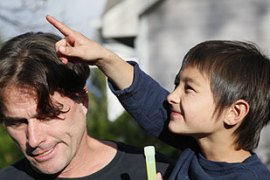 Six-year-old boy found hiding at home after balloon he was feared to be in crashes.