“We consider the recent terrorist attack to be the result of US action. This is the sign of America’s animosity against our country,” Ali Larijani, Iran’s parliamentary speaker, said.

Mohammad Marandi, an assistant professor at the University of Tehran, told Al Jazeera the attack could further damage Iran’s relations with the US.

“I think the greatest blow [from this attack] is to any Iranian trust with regards to the Americans,” he told Al Jazeera.

“On the one hand, the Americans are talking about rapprochement and building a new future, yet at the same time we see the Americans supporting groups in [Iran’s] Kurdish regions as well as in Sistan-Baluchestan.”

But Washington has denied involvement with the group, which it has labelled as a “terrorist” organisation, and condemned the attack.

“We condemn this act of terrorism and mourn the loss of innocent lives,” Ian Kelly, the US state department spokesman, said in a statement soon after the blast occurred.

“Reports of alleged US involvement are completely false,” he said.

Tehran has also suggested that Saudi Arabia and Britain have supported Jundallah to stir up trouble in the border area and have linked the group to al-Qaeda.

Majid Tafreshi, an Iranian researcher at University College London who specialises in ethnic and religious minorities, said there were clues as to the involvement of Western nations.

“Generally you cannot find any proof about this claim, but there are some clues,” he told Al Jazeera.

“The previous American governments used to play with ethnic minority and ethnic religious groups to play with Iranian politics,” he said.

“Also you can see in British media nowadays that people who are representative of this terrorist group are easily working and talking to British media and involved in politics and lobbying parliament … while this group is on the terrorist list and its leaders on the wanted list of Interpol.”

Other analysts have rejected the idea that the West supports Jundallah and other ethnic groups.

Ali Nouri Zada, the director of the Arab-Iranian Studies Centre in London, told Al Jazeera: “It’s very easy to point at Saudi, to the British and Americans … [but] it [Jundallah] is a local organisation,”

The southeastern province of Sistan-Baluchestan has been the scene of frequent clashes between security forces, ethnic Baluch Sunni insurgents and heavily-armed drug traffickers.

Its population feels an affinity with the Baluch population across the border in Pakistan and both countries accuse each other of supporting Baluch rebels in the other’s territory.

Following the attack, Ahmadinejad called for Pakistan to help Tehran apprehend those behind the attack.

“We were informed that some security agents in Pakistan are co-operating with the main elements of this terrorist incident… We regard it as our right to demand these criminals from them,” he was quoted by the Fars News Agency as saying.

“We ask the Pakistani government not to delay any longer in the apprehension of the main elements in this terrorist attack.”

Jundallah, which accuses Iran’s Shia-led government of discrimination against Sunnis, has been behind a number of attacks on security forces in the region.

“This [attack] is not totally out of the blue,” Abdul Sattar Doshoki, a Baluch political analyst, told Al Jazeera.

“It was expected because Jundallah have issued a statement saying they were going to carry out a suicide attack against those who align themselves with the Revolutionary Guards against their group.”

The blast occurred ahead of a meeting between Revolutionary Guards commanders and tribal chiefs, part of efforts to foster Shia-Sunni unity in the region. About 10 senior tribal figures were among the dead.

Television showed footage of three bodies covered with blood-stained clothing and of wounded people being taken to hospital.

Glass shards and other debris were scattered at the scene of the attack.

The Revolutionary Guards vowed to hit back at those behind the attack.

“The Guards will give a very harsh and crushing response to this group,” General Mohammad Pakpour, commander of Guards’ ground forces, was quoted as saying by the Fars news agency.

He said that the group “will never be able to launch another act like this in the country”.

Like Tehran, the Revolutionary Guards has also accused the West of involvement in the attack, saying in a statement that “surely foreign elements, particularly those linked to the global arrogance were involved”. 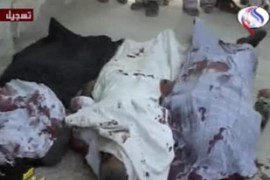