“At the time Mr Rajaratnam made the donations, the TRO was not banned by the Sri Lankan government, nor the US. It was a donation made in good faith,” Wijesuriya said.

The TRO was outlawed in Sri Lanka in November 2007 and its assets were frozen a year later.

The central bank is the leading investigating authority in Sri Lanka for all financial transactions that are suspected of breaching money-laundering laws.

The Liberation Tigers of Tamil Eelam (LTTE) is considered a “terrorist” organisation by Sri Lanka, the United States and the European Union.

After decades of civil war, the government declared victory over the LTTE in May.

According to Forbes magazine, Rajaratnam is the world’s 559th richest person with a net worth of $1.3bn. 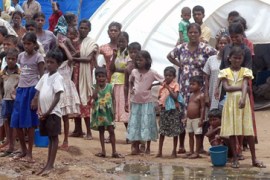 The aftermath of civil war