“It is irresponsible for any prime minister of Australia to send out a message of positive encouragement to people-smugglers in the region,” he told Fairfax Radio.

He expressed sympathy with the refugees’ plight, but was unmoved after being played a recording of a nine-year-old girl pleading to be given asylum.

The refugees’ unofficial spokesman, who gave his name as Alex, said they were “not angry with Australia but we are saddened by its decision”.

“We are not angry with Kevin Rudd, but we ask him to reconsider his decision and think about humankind and the humanity of all my people on the ship,” he said.

The packed boat was stopped in the Sunda Strait on Sunday after Rudd reportedly called Susilo Bambang Yudhoyono, the Indonesian president, to request assistance in intercepting it.

Indonesian officials have pleaded with the Sri Lankans to leave their boat, accept temporary accommodation in Indonesia and submit their applications for asylum through the normal channels.

But Harry Purwanto, the immigration chief for Banten province in West Java, where the boat has been berthed at Merak port, admitted there was “limited space” currently available for them.

“We’re still looking for shelter for them and don’t wish to separate them because we’re worried they may disagree,” he said.

The refugees threatened to set the boat on fire with cooking equipment but Alex later admitted the threats were not serious.

He said the asylum seekers were in danger in Sri Lanka in the wake of the government’s defeat of the Tamil Tigers, although he denies any of the 255 men, women and children on board were separatists.

“You got to ask yourself why these women and children, why these men risk their lives coming over this ocean, stay in the jungle for one month, why would they do that? It is out of desperateness to run away from genocide,” he said.

“We are staying on this boat until the international community comes together and makes a decision on finding a way to get us out of this country.”

Australia is seeing the biggest stream of asylum seekers in seven years, a surge the government blames on the conflicts in Afghanistan and Iraq, as well as the end of Sri Lanka’s decades-long civil war.

The Rudd government dismantled tough immigration and asylum laws after its 2007 election win, closing down detention centres in small Pacific island countries and saying that detention would only be used for security.

About 1,650 asylum seekers have arrived in Australia since January and 1,016 plus 19 crew remain at Christmas Island for processing. 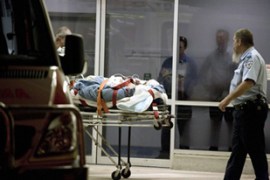 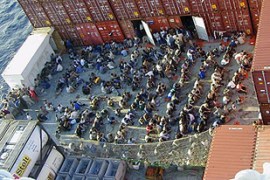 Asylum seekers will now be jailed only as a last resort.