The rioting was the worst outbreak of ethnic unrest seen in China in decades.

Officials said most of those killed were ethnic Han.

The clashes broke out following an initially peaceful protest in Urumqi on July 5 by Uighurs over a brawl at a factory in southern in China in which two Uighurs were killed.

Xinhua did not provide ethnicities for the six sentenced to death on Thursday although, as with Monday’s sentences, all appeared to have Uighur names.

The Chinese government has said the unrest was part of a separatist plot orchestrated by exiled Uighur leaders, who it has labeled “terrorists” although it has given no evidence to support its allegations.

But Rebiya Kadeer, leader of the World Uighur Congress, has denied any role in the protest which she said were a spontaneous response to years of repression by Chinese authorities

Reacting to the earlier convictions Kadeer, who was herself jailed in China for several years before being released into exile, said on Tuesday that executing Uighurs would only inflame ethnic tensions further.

Speaking on a visit to New Zealand she said sentencing protesters to death would not lead to peace and stability in the region. 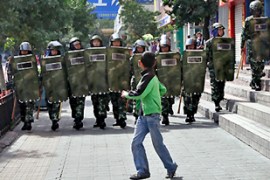 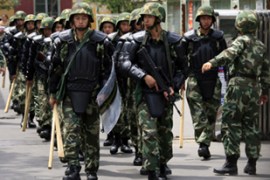