Restoring the state to the situation before the coup implies Zelaya’s return to office, a scenario that had been opposed by Robert Micheletti, Honduras’s de facto leader.

However, negotiators for Micheletti said they had not agreed on a possible return to power for Zelaya and added that talks would resume on Thursday.

Romeo Vasquez, the head of the Honduran army, which forced Zelaya from the presidential palace and into exile more than three months ago, also said that a deal appeared close.

“I know that we have advanced significantly, we are almost at the end of this crisis,” he told local radio HRN.

In Washington, the secretary-general of the Organisation of American States (OAS), which helped set up the talks, said he was happy with the progress that had been made.

“There has been progress and it gives us hope that it will lead to a Honduran solution to a Honduran crisis,” Jose Miguel Insulza said.

Zelaya is still sheltering at the Brazilian embassy in Tegucigalpa, more than three weeks after he returned to Honduras under the cover of darkness and in defiance of an arrest order by the de facto government.

He had said before the apparent deal on Wednesday that he would only accept a agreement under which he would return to office before presidential elections set for November 29.

To do otherwise would legitimise his overthrow and would be “a permit for more coups”, he said.

Zelaya was forced from power on the same day that he planned to hold a non-binding referendum on changes to the Honduran constitution.

The Honduran congress, courts and military had opposed Zelaya’s attempt to hold the public vote, accusing him of trying to win support for an extension to presidential term limits.

Zelaya has defended his effort to hold the referendum, saying that it was aimed at improving the lives of the poor in Honduras.

The protracted political impasse has taken a grim economic toll on the country’s 7.6 million-strong population.

The US has suspended about $30m in financial aid and cancelled the US visas of senior officials from the de facto government, while calling for Zelaya’s reinstatement. 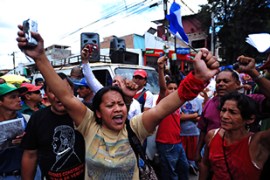 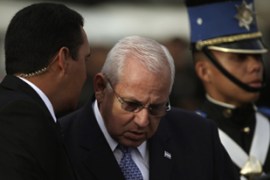 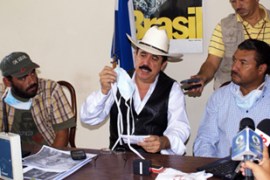 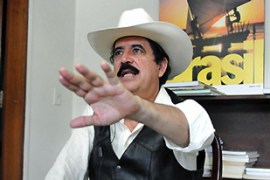