His candidacy has sparked a national uproar, with more than 44,000 signatures on an online petition asking him to drop out of the running.

The president dismissed reporters’ questions over the outcry, saying that journalists were busy focusing on controversies while he had to “solve problems”.

Sarkozy’s comments came shortly after he gave a speech where he had praised France for being a country where ability rather than privilege secured success.

“What counts in France is not to be born to a wealthy family, but to have worked hard and to have proved your worth through your studies and your labour,” he said.

Jean Sarkozy also dismissed the controversy, insisting he was working his way up the political ladder in an honest fashion.

“Whatever I say, whatever I do, I will be criticised,” he told Tuesday’s edition of Le Parisien daily.

He also told France-3 television that he would stay in the race despite the criticism he is facing.

“I am an elected official like any other, no matter what my name is, my age is, and my activities are,” he said.

The president’s son was elected as a councillor in the Hauts-de-Seine region last year and almost immediately became head of the ruling right-wing majority in the rich Paris suburb.

Such a swift rise for a man only in his second year of a law degree raised eyebrows in France, but his move on the levers of power in La Defense, which is planning a $1.5bn renovation, was a step too far for many.

“Not everything is permitted when you are the head of a democratic nation. It is not written in any manual, but there are certain things you don’t do and don’t allow,” the France’s Le Monde daily said in a front page editorial.

The Epad board chooses its next chairman on December 4 and there are as yet no other candidates. 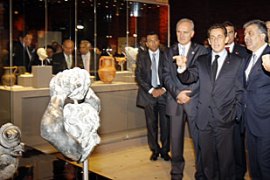