But Giorgos Petalotis, a spokesman for the Greek government, said the new Socialist government was committed to protecting human rights, citing their “decision to create a new citizen’s rights ministry” as evidence.

The Socialists, who won a snap election earlier this month, have pledged to crack down on illegal immigration while also granting citizenship to all immigrant children born in the country.

Human Rights Watch, a New-York based agency, said it had interviewed migrants who claimed Greek police had forced themselves or others to cross back into Turkey, from where they had travelled into Greece.

“Migrants are now being arrested throughout the country and then pushed back to Turkey. Clearly, people who need protection are not safe in Greece,” Troller said.

The report came as Frontex, the EU border agency, urged Turkey to co-operate with Greece and help stop an increasing flow of illegal migrants reaching it by sea.

It said Greece has seen a nearly 50 per cent increase in the number of migrants arriving via the Aegean Sea in the last year, with 14,000 illegal sea arrivals recorded in the first six months of 2009.

Gil Arias-Fernandez, deputy executive director of Frontex, said Turkey’s co-operation was a “crucial element” in cutting down the number of sea arrivals.

“It would be nice if Turkey collaborate with us, as long as Turkey doesn’t collaborate, it’s difficult to tackle the problem,” he said.

Greek officials argue that they are overwhelmed by the volume of arrivals, which are mostly from Iraq, Afghanistan and Africa, and say they receive little help from the EU and neighboring Turkey.

According to government figures, less then one per cent of asylum applications were accepted in Greece last year – with 379 people out of nearly 20,000 asylum requests, making it one of the lowest acceptance rates in the EU.

On Sunday, hundreds of activists marched to a police station in Athens to accuse officers of beating an illegal immigrant who died after being released
from custody. 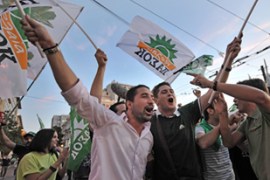 Socialists return to power after five years of conservative rule.