With a handshake and applause they began to repair almost a century of hatred and animosity.

This was a deal the international community wanted, and it was there to show its support as Turkey and Armenia stepped out of the past to build a new future.

Yet the problems which have plagued their relationship surfaced again just before the signing ceremony.

Both sides were to make speeches in the ceremony which was to be conducted in English.

But the Turks flagged up a problem with the statement planned by the Armenians. The Armenians said they too had difficulties with what the Turks wanted to say.

Everyone thought the deal had been done. The Swiss – who brokered six weeks of talks to get to this point – had declared the accords signed on their website. Hillary Clinton, the US secretary of state, was on her way to the conference venue at Zurich University.

Clinton turned her car around and began to put the deal back together again.

What followed were several rounds of negotiation and discussion as American officials looked to change a word, drop a sentence and amend a paragraph that would get both sides into the room.

In the end, it couldn’t be done. The only way to way to do it was simple – no-one would speak. Which is why an historic agreement was signed and no-one publicly congratulated the parties or even claimed the credit.

The points of contention were predictable – a reminder of how the present and future can be so affected by the past. It’s the same topics that have soured the relations between these two neighbours for the last 96 years.

Many Armenians say there should be no official contact until Turkey admits that the killing of more than a million Armenians in 1915, during World War One, was genocide, the first of the twentieth century.

The Turks reject the idea and says thousands of them died in what was the bloody consequence of the war and the end of the Ottoman Empire.

The two countries have pledged to establish a historical international commission to look at the issue and clarify what actually happened.

For the Turks, there is concern that Armenia has still to reach a settlement with neighbours Azerbaijan over the breakaway Armenian enclave of Nagorno-Karabakh. Thirty thousand died in the short and brutal conflict there in the early 1990s.

Turkey feels a close affection for Azerbaijan. A phrase often quoted is “two nations, one people”. Turkey responded to the Armenian-supported victory by closing its borders, limiting trade and movement.

So the two accords open the way for the countries to normalise relations, to exchange diplomats and to re-open the borders within two months.

They still have to be ratified by the parliaments in both countries.

Nationalists on both sides and Turks and Armenians living abroad have loudly expressed their opposition, but that is unlikely to be enough to stop them from being endorsed.

The main question is why two bitter enemies suddenly came together. And at the heart of that lies money and influence.

Turkey is seen to be dealing with its past, bolstering its campaign to be admitted to the European Union, something Armenia aspires to in the not-so-near future.

Energy pipelines through the area no longer have to by-pass Armenia at the Turks insistence and the additional cost of hundreds of millions of dollars.

Armenia gets to try to do something with its economy which is struggling desperately, and Turkey again looks like a serious regional player, wielding significant influence.

But with so many outstanding issues, what really happened here in Zurich on Saturday was just a diplomatic baby step – and like a baby, it appeared fearful and hesitant.

Many, though, will be happy it was at least a step in the right direction. 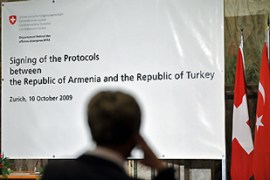 Foreign ministers sign protocols to normalise ties after a century of hostility.