Palestinian leaders called for a one-day strike, as some suggested that the Israeli actions could spark a third uprising, or intifada, against the occupation.

Mahmoud Abbas, the Palestinian president who heads the Fatah movement, called the strike “to peacefully protest”.

The protest also sought to “proclaim the attachment of the Palestinian people to their holy places and to Jerusalem as the eternal capital of the independent Palestinian state”.

Security forces set up checkpoints around and within the Old City and were seen turning back Palestinians who do not live or work there.

But they were allowing in tourists and Jews wanting to pray at the Western Wall – also known as the Wailing Wall – just below the mosque compound.

Most shops in the Old City shut down, though some shop-owners complained about the strike.

“We need to strengthen our presence in Jerusalem, not weaken it,” said Ramdan Abu Sbeeh, 32, a sweets-seller who defied the strike call.

A senior police official told public radio: “We have deployed thousands of people in Jerusalem and in the north of Israel following incitation by extremists.”

Israeli police have accused the Islamic Movement of inciting tension and this week briefly detained its leader, Sheikh Raed Salah, whom they said had made “inflammatory statements”.

Salah, who previously spent two years in Israeli prison, has repeatedly called in recent days for Muslims to “defend” al-Aqsa against Israel.

Sherine Tadros, Al Jazeera’s correspondent in East Jerusalem, said: “Despite the heavy police presence around the Old City we have still been hearing of skirmishes and clashes taking place around occupied East Jerusalem.

“We’ve also heard of a brewing situation taking place not far from the Old City where dozens of Palestinian protesters have been clashing for more than an hour with Israeli police forces. There are at least four Palestinians and five Israeli soldiers who  were injured in those clashes. The protesters were subjected to tear gas by the Israeli police, that situation we are hearing has calmed down.

“All of these protests and skirmishes have been taking place today, as they have been throughout last week, because of Israel’s continued restrictions on the al-Aqsa mosque. This has caused outrage not just in the territories but across the Muslim world.

“The Palestinians say it is yet another example of Israel asserting its occupation and presence here in the Old City. The Israelis are saying this is simply a security measure to keep the area safe,” she said. 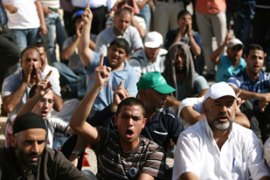 Scuffles erupt between Israeli police and Palestinians amid restrictions on mosque entry. 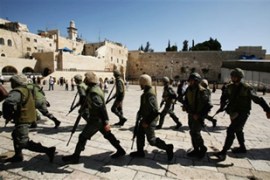 Clashes as Israel shuts off al-Aqsa