If Iran is willing to address the nuclear issues, then there probably will be subsequent meetings, PJ Crowley, the US state department spokesman, said in Washington.

“That process will take some time,” he said.

“We’re not going to make a snap judgment on Thursday. We’re going to see how that meeting goes, evaluate the willingness of Iran to engage on these issues.”

Western powers are also keen to gauge Russian and Chinese reaction to last week’s announcement that Tehran had been concealing the uranium enrichment plant at Qom.

Speaking to Al Jazeera, John Large, an independent nuclear consultant, said: “It’s quite a complex area to actually decipher whether the effort is going into a civilian programme or into a military programme.

“So you’re looking at all the jigsaw pieces coming into place and I’m afraid the conclusion that is coming out of this is that these jigsaw pieces mean that there is a strong weapons programme underway.”

Mohamed ElBaradei, the outgoing  head of the UN’s nuclear watchdog, said on Tuesday that Iran was “on the wrong side of the law” by not declaring the second plant.

“Iran was supposed to inform us on the day it was decided to construct the facility,” he said.

Iran declared the facility only after it had been revealed by Western intelligence agents.

Washington has expressed its willingness to hold one-on-one meetings with Iranian negotiators, a move that comes alongside a possible softening in Iran’s approach.

According to Iranian state-run news agencies, Mahmoud Ahmadinejad, the Iranian president, announced in Tehran that Iran would be willing to fuel Iran’s nuclear facilities with uranium purchased from a third party country.

The meeting in Geneva marks the first time a US official will be a “full participant” in a meeting of the major powers with Iran.

At a similar meeting in Geneva in July 2008, when William Burns, the US official attending, left the room at one point to avoid having to shake hands with Jalili, according to diplomats who were present.

Jalili earlier described the scheduled Thursday’s meeting in Geneva as an “opportunity and a test” for those attending and said “we are entering the talks with good will”.

“Iran’s national, regional and international capacities … could be an opportunity for creating a world based upon peace, justice and progress,” he said.”

Tehran is already under three sets of UN sanctions over its repeated refusal to freeze its uranium enrichment activities, which Western powers fear are aimed at building a nuclear bomb.

Washington has suggested possible new sanctions on banking and the oil and gas industry if Iran does not comply with Western demands, but Thursday’s talks are not expected to end in a new round of sanctions.

The Reuters news agency quoted an unnamed senior official from the US administration as saying: “This is the engagement track tomorrow, not the pressure track.” 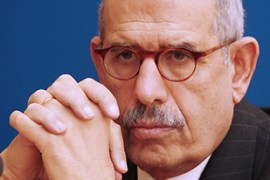