“I will defend myself in the courtrooms and ridicule my accusers, showing all Italians … the stuff I am made of.”

Speaking to Al Jazeera from the Italian capital, Professor James Watson, head of international relations at the American University of Rome, said: “There’s been a very strong reaction [to the court ruling] from all the politicians of course.

“The centrist parties, including Berlusconi’s people, have said ‘well of course he’s going to carry on’.

“The centre-left can’t afford to go to elections at the moment, doesn’t want to.

“Only the extremes want to go to elections, Berlusconi’s allies, Bossi in the Northern League, would quite like it and the far left and the Di Pietro party [Italia dei Valori] would also like it.

“Berlusconi would like it himself because he thinks he could win.”

The immunity law spared the country’s four top office holders, the prime minister, president and two parliament speakers, from prosecution while in office.

It had been pushed through by Berlusconi’s coalition in 2008 when the premier faced separate trials in Milan for corruption and tax fraud tied to his Mediaset broadcasting empire.

Even if convicted, Berlusconi could still stay in power as sentences in Italy are usually not served until all avenues of appeal are exhausted.

It is also possible that the statute of limitations will kick in before then.

In the corruption trial, Berlusconi was accused of ordering the 1997 payment of at least $600,000 to Mills, a British lawyer, in exchange for the lawyer’s false testimony at two hearings in other corruption cases in the 1990s.

Berlusconi’s portion of the trial was frozen when the immunity bill was passed, but the proceedings continued for Mills.

In February, he was convicted of corruption and sentenced to four-and-a-half years in prison.

Mills, the estranged husband of Tessa Jowell, Britain’s Olympics minister, has maintained his innocence with his appeal set to begin on Friday.

The tax fraud trial, in which Berlusconi also denies any wrongdoing, centres on film rights in the United States which prosecutors allege were bought by Mediaset at artificially inflated prices to avoid tax.

On Thursday, officials in Switzerland said evidence was mounting against four Mediaset managers said to be involved in laundering money linked to the deals in parallel legal proceedings in Switzerland.

The Swiss investigation concerns multimillion-dollar money transfers through Swiss bank accounts, which have also been the focus of prosecutors in Milan.

Wednesday’s ruling added to the mounting problems for Berlusconi, who is already engulfed in a headline-grabbing sex scandal over his purported dalliances with young women.

Last weekend, tens of thousands took to the streets of Rome against his alleged attempts to curb freedom of the press.

A few days later, a court in  Milan ordered his holding company Fininvest to pay $1bn to a rival for a case dating from the 1990s.

Berlusconi has already ruled out stepping down, and his conservative allies, who have a comfortable majority in parliament, have rallied to his support.

“We’ll continue to govern without this law,” Berlusconi said on state radio.

He added that he felt “absolutely necessary and indispensable to the democracy, freedom and well-being of this country”.

Berlusconi has a history of legal troubles stemming from his private interests and he has been either acquitted or cleared because the statute of limitations had expired. 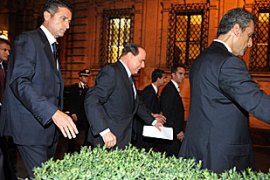 Italian PM vows to stay on saying court is a “political organ” dominated by the left. 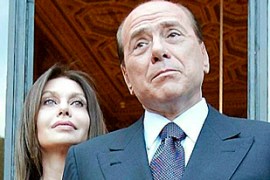 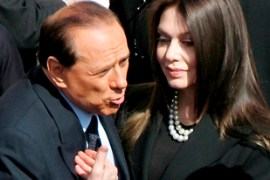 Veronica Lario confirms she will file for separation from Italian prime minister.